Annual Report of the Office for the Protection of Competition 2020

2021-09-01
The Office for the Protection of Competition has published the Annual Report, summarising its notable activities in 2020 and outlining its agenda for 2021, the year in which the Office celebrates its 30th anniversary. 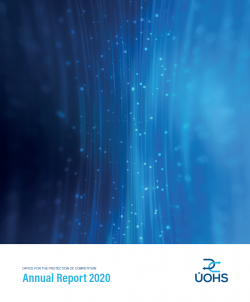 "The Czech Republic needs a strong Office with necessary authority and power to protect the market, promote competition and decide on the fairness of public procurement. And this applies twice in these current turbulent times, when modern society on a global scale finds itself in a situation it has never experienced before. I believe that the COVID-19 pandemic and related measures may lead, in their consequences, to an economic crisis and also to fundamental changes in certain sectors. It can be assumed that many undertakings will stick to anti-competitive practices significantly more often in these unusual conditions. It will therefore be particularly important to pursue a strong, focused and rather strict competition policy," said Petr Mlsna, Chairman of the Office, in his foreword to the Annual Report.
The individual chapters of the Annual Report focus on the Office's areas of competence: protection of competition, supervision over public procurement, supervision over significant market power and advisory activities in the field of State aid. Each of these chapters includes a section on recent legislative developments, statistics and characteristics of the relevant activities of the Office and significant cases. Chapters on the Office's international cooperation and information service provide a complement to the overall concept of the Annual Report.
In the area of competition, the Office issued 65 first-instance decisions in 2020, imposing fines exceeding CZK 266 million. There were 11 decisions concerning prohibited agreements, seven of which dealt with horizontal cartels. The most significant cases were represented by two bid rigging cartels in the IT sector and a rail freight cartel. Four decisions fined anti-competitive resale price maintenance agreements, mostly concluded between distributors and retailers. One case concerned an abuse of a dominant position maintained through unfair contract terms. In the area of supervision over anticompetitive conduct of public authorities, five fining decisions were issued in relation to general binding decrees regulating gambling and one decision was adopted in relation to hybrid car parking rules. Concentrations between undertakings were subject to 48 decisions in 2020.
At the second, i.e. administrative review, instance, seven decisions were issued in the area of competition. The most significant one includes the confirmation of a fine of more than CZK 10 million imposed on OSA - Ochranný svaz autorský pro práva k dílům hudebním, z. s. (professional association of composers, lyricists and musical publishers). Within the judicial review, the Office achieved significant success in 2020 when defending its competition related decisions. The Regional Court in Brno dismissed seven of the nine actions filed, and the Supreme Administrative Court ruled in favour of the Office in all four cases dealt with in 2020.
In the area of significant market power, the Office issued two decisions in 2020 and imposed fines exceeding CZK 32 million for unfair practices.
The Office's public procurement oversight agenda grew significantly in 2020, especially in terms of the number of complaints received (by 95.9%), the number of applications filed (by 20.6%) and the number of administrative proceedings initiated (by 12.7%). The significant increase in the number of complaints received did not lead to increase in the number of proceedings initiated ex officio, which indicates that number of complaints received is unfounded. In 2020, the Office concluded nine inspections, in six cases finding an infringement of the provision inspected. In 2020, a total of 377 decisions were issued in the first instance of public procurement and 65 fines were imposed in the total amount of CZK 11,904,000. The average time for issuing a first stage decision in 2020 was 38.8 days.
At the second instance of public procurement, the trend of a slight increase in the number of appeals filed continued. In 2020, a total of 223 appeal decisions were issued, out of which approximately 66% upheld the first- instance decision. The average time for the adoption of a decision of the Chairman decreased to 53 days. The Office tightened sanctions in 2020, with fines imposed in second instance decisions increasing by almost 7%, while the number of fines imposed decreased by almost 17%. In total, 25 fines were imposed in the second instance, totalling CZK 11,021,000. In the area of the judicial review, the number of actions and cassation complaints brought before the competent courts decreased by a third in 2020. The Office was successful in 64% of the cases before the Regional Court in Brno and 74% of the cases before the Supreme Administrative Court.
In the area of State aid, the core activity of the Office in 2020 was focused primarily on cooperation with the European Commission in negotiating a large number of aid programmes adopted in response to the economic consequences of the global COVID-19 pandemic. A total of 26 aid programmes were notified for the Czech Republic by the end of 2020.

2022-06-08 / HRUŠKA Retail Chain Shall Return CZK 39 Million to Food Suppliers After the Office's Intervention The Office for the Protection of Competition (hereinafter referred to as “the Office”) has concluded two administrative proceedings in the field of significant market power against the retail chain...

2019-08-26 / Retail chain Albert has proposed commitments; contracts will be modified for benefit of suppliers The Office for the Protection of Competition terminated the administrative proceeding against retail chain Albert initiated due to possible abuse of significant market power after the Albert´s commitment...