2022-10-10
On 10 October 2022, as part of the Czech Presidency of the Council of the European Union, the international conference European Competition Day was held in Prague, which was organised by the Office for the Protection of Competition (hereinafter referred to as "the Office").

Top officials from the competition authorities of the Member States, representatives of the European Commission's Directorate-General for Competition and other competition law experts discussed topical issues at the conference, in particular the role of competition policy in a greener and more sustainable Europe, the issue of double punishment, as well as major projects of common European interest.
The European Competition Day were opened in front of 150 participants with speeches of Petr Mlsna, Chairman of the hosting Office for the Protection of Competition, Margrethe Vestager, Executive Vice-President of the European Commission, and Pavel Blažek, Minister of Justice of the Czech Republic. 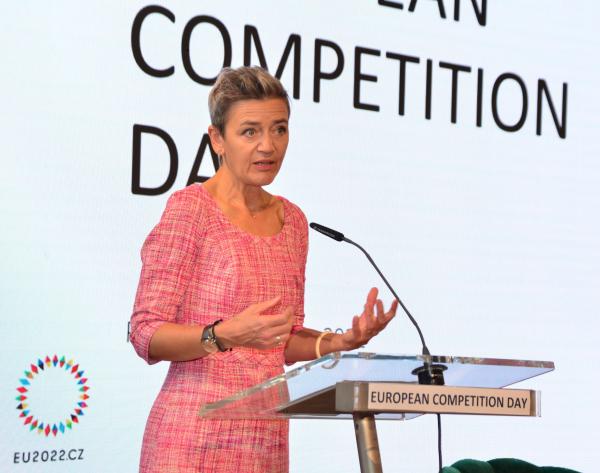 The Chairman of the Office for the Protection of Competition highlighted the challenges which the European economy is currently facing and outlined the role which competition authorities can play in overcoming the economic crisis. "Above all, we need to fulfil our main role, which is to detect and punish cartels and abuse of dominant position. But we should also assist the political representation so that it does not completely surrender to the general call for regulation. Regulation should only be imposed where it is really necessary and to the minimum possible extent," said Chairman Petr Mlsna, who further presented his reserved stance towards the use of competition protection as a tool to achieve green policy objectives or upcoming changes in legislation.
In her speech, Executive Vice-President of the European Margrethe Vestager stressed the importance of competition in the economy. " Competitive markets are not a luxury to be enjoyed on calm sunny days. They are a necessity; all the more so when the weather gets stormy. And any exceptions we make in the name of crisis must be well justified and contained within the flexibility arrangements provided by our existing competition rules," stated the Danish politician, adding that competition is a means of achieving both efficiency and fairness in markets. These two principles are not mutually exclusive, according to Margrethe Vestager, as long as competition authorities use the right theory of harm. The Executive Vice-President of the European Commission illustrated her point with the latest case involving the pharmaceutical company TEVA.
The expert panel on the challenges for competition policy in the context of the transition to a greener and digital economy addressed several topics. Kamil Nejezchleb, Vice-Chairman of the Office, Olivier Guersent, Director General of the European Commission's Directorate-General for Competition (DG Comp), Margarida Matos Rosa, Chair of the Portuguese Competition Authority, Professor Frédéric Jenny from the Organisation for Economic Co-operation and Development and academic Thibault Schrepel discussed, to which extent it is compatible and technically feasible to promote environmental objectives through competition policy, the new tools that competition authorities are using in their work, and aspects of artificial intelligence and its potential impact on competition, as well as new forms of anticompetitive conduct that may occur in the digital environment.
The second panel, composed of academics Michal Peter and Renato Nazzini, judge Michal Bobek and the President of the Hungarian Competition Authority Csaba Balázs Rigó, addressed the issue of the ne bis in idem principle in competition law. Not even the recent change in case law practice by the CJEU has had a major impact on the approach of competition authorities to parallel application. It remains therefore possible for a single case to be heard in parallel before different jurisdictions.
The final topic of the European Competition Day came from the field of State aid, as it is used to fund so-called Important Projects of Common European Interest (IPCEI). These projects, which typically involve private companies from a number of Member States, aim to support the development and implementation of new strategic technologies, such as the production of electric batteries, the production and use of hydrogen, etc. They were discussed by academic Caroline Buts, Karl Soukup from DG Comp and Preben Pettersson from the Danish Ministry of Industry and Trade, under the moderation of Peter Solský, Vice-chair of the Office.