2022-07-29
The Office for the Protection of Competition (hereinafter referred to as “the Office”) publishes the English version of its Annual Report for the year 2021, during which it not only celebrated 30 years of its existence, but also has undergone a number of significant changes. At the very beginning of the year, the Chairman of the Office, Petr Mlsna, appointed new members of the Appellate Commissions on the basis of a transparent selection process. There were also changes in the top management of the Office - in April, Kamil Nejezchleb was appointed as Vice-Chair in charge of the Competition Division and, in July, Markéta Dlouhá was appointed as Vice-Chair in charge of the Public Procurement Division. 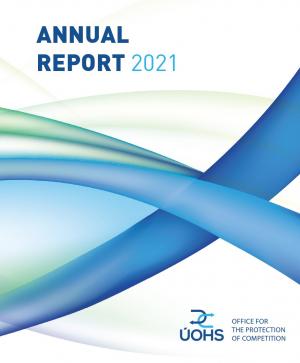 In 2021, the Office strived to become more open to the public despite restrictive COVID measures. A conference on State aid was held in June via webcast and a total of five Methodological Days dedicated to public procurement issues were held during the year. Apart from the ceremonial conference held in September on the occasion of the anniversary of the Office, the 14th St. Martin's Conference took place in November after a one-year break. During the year, the representatives of the Office participated in multiple conferences, workshops and other events where they discussed with the professional public the application of legal regulations within the powers of the Office. Memorandum of cooperation was signed with Masaryk University, Charles University and Mendel University and the Faculty of Law of Palacký University.

Considering decision-making practice in the field of competition, nine prohibited agreements were detected and punished, six of which concerned the most serious horizontal cartels, and fines exceeding CZK 160 million were imposed. For the first time ever, a ban on participation in public procurement was also imposed for bid rigging. The Office had significant success in judicial review of competition decisions - the Supreme Administrative Court upheld all ten decisions of the Office under review and the Regional Court in Brno upheld only two of the 12 actions filed.

In the field of public procurement supervision, the number of administrative proceedings and complaints filed increased significantly by approximately 40 percent. There were 737 decisions issued on merits and on interim measures. The total amount of fines imposed exceeded CZK 550 million, mainly due to the highest fine ever imposed in this area, which was a fine imposed on the Ministry of Defence for the purchase of army helicopters.