2021-09-22
The Office for the Protection of Competition (hereinafter referred to as ''the Office'') celebrated 30 years of its existence today with a celebratory conference held at the Liechtenstein Palace in Prague. The Chairman of the Chamber of Deputies, Mr. Radek Vondráček, the Prime Minister, Mr. Andrej Babiš, the Rector Mr. Tomáš Zima and representatives of the Ministry of Industry and Trade and the Ministry of Regional Development expressed congratulations on the "birthday" of the Office.

The predecessor of the Office, the Czech Office for the Protection of Competition, was established in 1991, when the first Competition Act was also adopted. Between 1992 and 1996, the Office was transformed into a ministry, and since November 1996, it has been functioning under its current name. 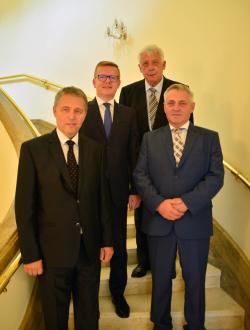 The conference, which was attended by approximately 100 representatives of the state administration, local and regional authorities, professional associations, advocacy and academic institutions, was opened by Mr. Petr Mlsna, Chairman of the Office. In his speech, he stressed the importance of the Office for the functioning of the market economy, but also reminded the role of the Office in the field of Public Procurement, State aid and Significant Market Power. The Chairman of the Chamber of Deputies, Mr. Radek Vondráček, highlighted in his speech, among other things, importance of the fact that the Office's premises are located in Brno.

In his speech, Prime Minister Mr. Andrej Babiš spoke, among other things, about the role played by the Office in approving State aid to overcome the consequences of the coronavirus pandemic. He also praised the Office for uncovering cartels among tenderers for public procurement contracts, as the Office is among the best in Europe in this area.

The representative of the Ministry of Industry and Trade, Deputy Minister Mr. Jan Dejl, appreciated the good cooperation between the two institutions, which takes place mainly in the areas of State aid and Competition. On the other hand, Mr. Vlastimil Fidler from the Ministry of Regional Development, which is also responsible for the area of public procurement together with the Office for the Protection of Competition, focused on relations in this area. Mr. Tomáš Zima, Rector of Charles University, mentioned joint research projects and the recently concluded memorandum between the two institutions.

Mr. Kamil Nejezchleb, Ms. Markéta Dlouhá and Mr. Petr Solský introduced the audience to the most important topics which the Office is dealing with or will be dealing with in the near future in the individual areas of its competence.