2022-09-23
On 23 September 2022, the 11th meeting of the Network of First Instance Review Bodies on Public Procurement took place in Prague as a part of the Czech Presidency of the Council of the European Union. The meeting was organised by DG Grow of the European Commission, together with the Office for the Protection of Competition. The agenda addressed current issues in the field of public procurement.
Almost 50 representatives of authorities responsible for the review of public procurement in EU Member States attended today's meeting of the platform, which aims for cooperation of these supervisory bodies and exchange of their experience. 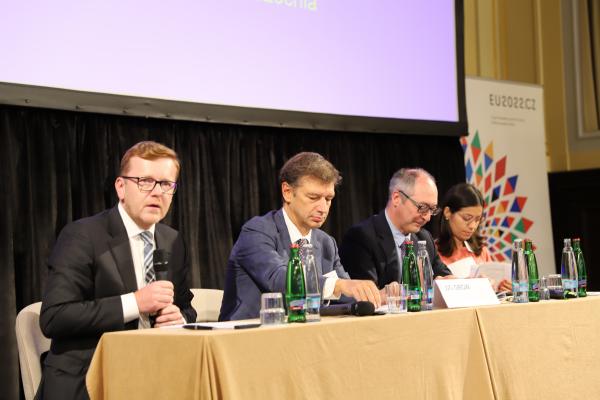 The meeting was opened by Petr Mlsna, Chairman of the Office for the Protection of Competition, who emphasised in his opening remarks the challenges recently faced by contracting authorities in all Member States. "The contracting authorities have not yet had time to deal with the repercussions of the COVID crisis and are already facing a new one. Last year, we witnessed a sharp rise in the price of building materials, this year we have seen an unmanageable rise in energy prices and associated general inflation. All this puts high demands on contracting authorities, both for the existing and upcoming contracts," said the Chairman of the Office.
The agenda included several topical issues currently being dealt with by the supervisory bodies. First, representatives of the European Commission and Austria reported on certain ongoing cases as well as recent case law of the Court of Justice of the European Union, such as judgments concerning the negotiated procedure without publication of a notice. DG Grow representatives also explained their view on the direct public contract award procedure.
Maja Kuhar, Chairperson of the Croatian State Commission for Supervision of Public Procurement Procedures, presented practical experience with the application of the regulation imposing sanctions against Russia, on the basis of which contracting authorities are not allowed to award contracts to contractors with ties to the Russian Federation.
Subsequently, Iveta Pospíšilíková from the Office for the Protection of Competition discussed in detail the issue of excluding ineligible suppliers from the award procedure. A wide discussion on this issue followed, in which judgments of the Court of Justice of the European Union and specific cases from the decision-making practice of the participating authorities were mentioned.
Zuzana Krajčovičová from the Slovak Office for Public Procurement concluded the meeting by presenting strict Slovak legislation on frivolous complaints. Abuse of the right to defend against a contracting authority's action is a major problem for many review bodies, but properly set up legislation can significantly mitigate this issue.
Press Unit of the Office
sdílet:
Sdílet na Facebooku Sdílet na Twitteru Sdílet na LinkedIn