During his visit to the Slovak Antimonopoly Office in Bratislava on Wednesday, the Chairman Petr Mlsna had a meeting with its Chairman Tibor Menyhart and the Vice-Chairman Boris Gregor. On Thursday, he visited partners from the Hungarian Competition Authority Gazdasági Versenyhivatal (GVH) in Budapest, where he held talks with its President, Mr. Csaba Balázs Rigó.

At both foreign authorities, the common competition issues and problems were mainly discussed, as well as the upcoming Czech Presidency of the Council of the European Union. The Chairman of the Office accepted invitation to participate in the Visegrad 4 Competition Conference, which will take place at the end of April in Hungary, and also in the competition conference organised by the Slovak Antimonopoly Office in May. 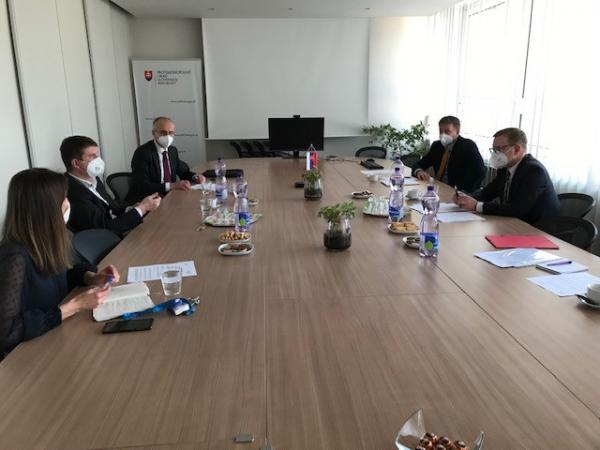 The Chairman Petr Mlsna agreed with his foreign colleagues to apply a careful approach to environmental considerations when assessing prohibited agreements, adding that they would only accept such arguments when the benefits of a relevant agreement are fully passed on to consumers. Representatives of all the given authorities also stressed the considerable importance on the forthcoming EU regulation on digital markets and services, in particular in case of large technology companies whose activities and market power pose a major challenge to competition authorities. While the European Commission will be the main actor in this area, the national competition authorities will also be empowered to intervene in individual regional markets.

Another topic they had discussed was the effective use of investigatory powers acquired by competition authorities according to the ECN+ Directive. In Hungary, for example, they have significant experience in securing digital evidence from cloud storage when detecting cartel agreements. They had also presented a case in which they used police wiretaps in a cartel investigation. In Slovakia, they also have the statutory power to request information from police files.

Other practical competition policy issues were also on the agenda, such as the possibilities and role of competition authorities in mitigating price increases in the construction sector, which all Central European countries have recently encountered. Liability of individuals and parent companies for cartel agreements was also discussed, in particular the joint and several liability of multiple legal entities forming a single undertaking.

The visits to Slovakia and Hungary will contribute to more intensive cooperation with partner competition authorities, which goes beyond the general cooperation within the European Competition Network (ECN), and, in particular, had enabled a more detailed discussion on common technical topics at expert level. 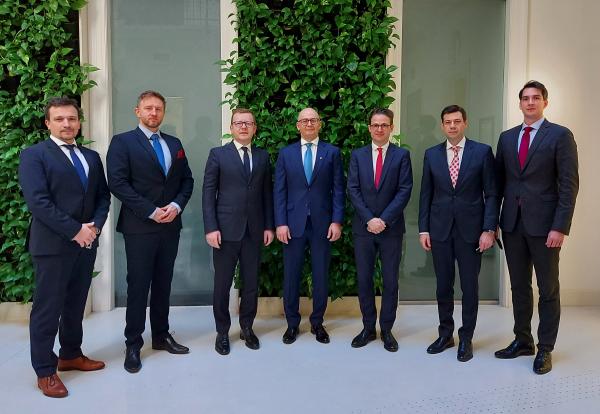 2022-09-22 / Reduced Fine for Aroma Candle Distributor, and, for the First Time, the Office Took the Compliance Program into Account The Office for the Protection of Competition (hereinafter referred to as “the Office“) imposed a fine of CZK 17,649,000 on the undertaking Z - TRADE s. r. o. for entering into prohibited agreements...

2022-09-12 / The Office Imposed Fines of CZK 280 Million on Undertakings Specialised in Issuing Food Stamps for Anti-Competitive Coordination of Terms of Trade In its first-instance decision, although not in force, the Office for the Protection of Competition (hereinafter referred to as "the Office") imposed fines in the total amount of CZK 279,152,000 on Sodexo...

2022-08-25 / The Office Imposed Maximum Possible Fines for Obstruction of a Dawn Raid The Office for the Protection of Competition (hereinafter referred to as "the Office") has imposed the maximum possible fines on three undertakings suspected of being involved in a cartel agreement for...

2022-07-07 / Sewing machines supplier STRIMA agreed with a settlement procedure and was thus imposed a lower fine for vertical agreements In its first-instance decision, the Office for the Protection of Competition (hereinafter referred to as “the Office”) imposed a fine of CZK 4 446 000 on STRIMA CZECH s.r.o. for entering into prohibited...

2022-03-23 / The Office imposed fines for cartel of AV equipment suppliers By its first-instance decision, the Office for the Protection of Competition imposed fines in the total amount of CZK 2 442 000 on the undertakings AV MEDIA SYSTEMS, a.s., M plus spol. s r.o., Nowatron...