2021-11-25
Petr Mlsna, the Chairman of the Office for the Protection of Competition (hereinafter referred to as ''the Office''), held talks this evening with Margrethe Vestager, Executive Vice-President of the European Commission, whose competence includes the area of competition, as part of a working visit in Brussels. 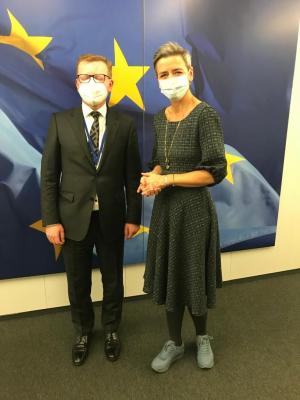 The topics of the discussion were, for example, information on the progress of the transposition of the directive on strengthening the powers of competition authorities, the so-called ECN+ Directive, which has not yet been implemented in the Czech Republic because the proposed amendment to the Act on the Protection of Competition had not been discussed by the previous Chamber of Deputies. The Office is therefore currently preparing a new legislative draft proposal.

The chairman Petr Mlsna also informed the Commissioner about the successes of the Office for the Protection of Competition in fighting bid rigging cartels, i.e. agreements between tenderers for public contracts. In this context, the Office benefits from the fact that it also has supervision of public procurement within its competence and can therefore better obtain relevant information. Several measures and State aid schemes which the Czech Republic, through the Office for the Protection of Competition, has notified to the European Commission for approval were also thoroughly discussed. State aid has to be assessed and approved by the European Commission before it can be granted in the Member States of the European Union. For example, the European Commission is currently assessing State aid for the so-called " Kurzarbeit ", postal service providers and the electricity sector.

Last but not least, the Chairman of the Office informed Ms. Vestager about the preparations for the Czech Presidency in the Council of the European Union, which will take place in the second half of 2022. In the area of competition, the Czech Presidency is currently expected to cover issues such as the regulation of digital markets, subsidies from third countries distorting the single market and collective bargaining of self-employed persons.

2022-01-04 / The Undertaking GARLAND Harmed Consumers, and It Now Faces a Fine of Almost CZK 100 Million In its first instance decision, the Office for the Protection of Competition (hereinafter referred to as ''the Office'') imposed a fine of CZK 96,751,000 on GARLAND distributor, s.r.o. for vertical agreements...